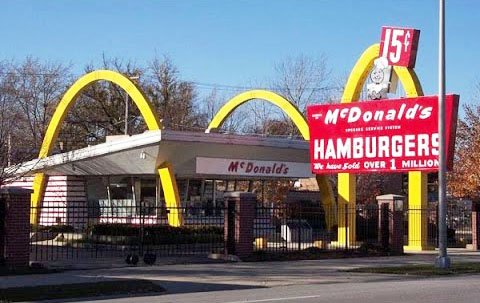 I doubt if there’s a person alive who hasn’t heard of McDonalds.  It was started by 2 brothers in 1948 in San Bernardino and their last name was really McDonald, who knew?

Since 1955 when Ray Kroc took over the company, it has grown exponentially with over 36,000 locations worldwide.

Kroc feuded with the McDonald brothers for control, and in one of the shrewdest deals of all time, bought the business — and the rights to their name — out from under them in 1961 for $2.7 million. Today the company is worth more than $100 billion, and Ray Kroc is considered its founder. He died January 14, 1984 at the age of 81 and was worth an estimated $500 million at the time of his death.

Let’s look at some of the menu items that made this company so sucessful. Chicken McNuggets are advertised as being made with juicy and tender 100% white meat chicken   While it is advertised as being made with 100 percent USDA Grade A chicken, they don’t really say it’s 57% fat. In addition, there’s a secret ingredient – TBHQ (Tertiary Butylhydroquinone).  What the heck is that you ask? This powerful petroleum-based preservative (which is also found in varnishes, lacquers, pesticide products, cosmetics, and perfumes) may be used to help the chicken and other ingredients maintain their distinct shapes.

Eaten in high doses – and it’s hard to determine exactly how much is added to McNuggets – this chemical can be toxic. Possible side effects include nausea, delirium, collapse, tinnitus (ringing in the ears) and vomiting. Some studies have linked it to hyperactivity in kids, asthma, rhinitis, dermatitis, aggravated ADHD symptoms and restlessness. Sound appetizing so far?  Read on!

McDonalds is bringing back the famous McRib Sandwich which contains about 70 ingredients — including a flour-bleaching agent used in yoga mats. As it appears out of the box, the McRib sandwich consists of just five basic components: a pork patty, barbecue sauce, pickle slices, onions, and a sesame bun.  The McRib is actually a “restructured meat product.” According to an article from Chicago magazine, which cites a 1995 article by Mandigo, “restructured meat product” contains a mixture of tripe, heart, and scalded stomach, which is then mixed with salt and water to extract proteins from the muscle. The proteins bind all the pork trimmings together so that it can be re-molded into any specific shape — in this case, a fake slab of ribs.

If you are still salivating when you think of McDonald’s, then I say go for it.  I have never had a Big Mac, or any other fast food on their menu, and I can honestly say, after reading these ingredients, I’m certainly not missing anything.

I Can’t Imagine This!

Are you Getting These?