This isn’t getting any better! 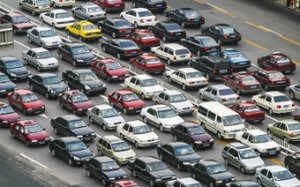 OMG!  Is it me or does anyone else think the traffic is getting worse in the Phoenix area? It takes twice as long to get anywhere and total concentration to avoid an accident.  Yeah, Yeah, I know what you are going to say . . . total concentration is a necessity when driving anywhere or anytime!  You are right, but my concentration turns to impatience when I’m sitting in traffic that is not moving, especially when I have an appointment to get to and planned enough time to get there, so I thought. Rush hour has turned into a 7am to 6pm timeframe with no relief in sight.

The stats say that 200 new people move into the Valley daily, and don’t you know that they are all on the road at the same time I am.  By the way, is there a law that says when people move to Arizona, they must know how to drive?  I don’t think so, and that’s part of the problem.  Some of these nitwits haven’t a clue how to drive on a public street. Add them to the residents who drive like there is no one else on the road, and we have pure craziness.

And the construction on every road! Let’s not even go there.  When the traffic is at a standstill on the freeways, I’m sure I’m not the only one who exits to take the streets.  Bad choice!  Re-routing traffic from 3 lanes down to one during rush hour is just plain idiotic.

Carpooling would be a good solution but no one ever goes where I’m going! Getting a drone with a little seat could work but then I would encounter just as many crazy drivers in the air.  Don’t even suggest the light rail, and Uber isn’t an idea either since they would be stuck in traffic, too!

Something to be said for retirement!

Not My Favorite Thing

Stick a Fork in It!

Rebelling against the open-concept Kitchen