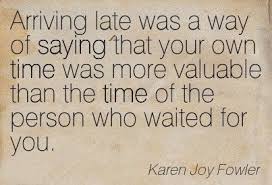 I grew up with punctuality!  It started when I was a child and had the responsibility of getting my sister to school on time.  Since then I’ve been a stickler for not being late to anything.  And if I am going to be more than 5 minutes late to an appointment, I make it a habit to call and let the person know I’m running behind.

There are people in this world who think clocks and watches are only decorations.  They don’t have a clue what the word “late” means, nor do they care.  It just seems to be their way of life, which is acceptable in some societies, but as far as I can tell, ours isn’t one of them.

Being a few minutes late occasionally with a valid excuse is okay.  It happens to all of us.  Flat tire, accident on the freeway, babysitter being late…these excuses only work a few times before an individual gets the reputation of always being the “late person.”   But to not make a phone call, text or tweet to the person(s) who are in the meeting is inconsiderate, especially in the professional world.

I have heard the expression, “fashionably late” several times, but what does that mean?  Making a grand entrance to a party so one will be noticed?  Walking into a wedding or play that has begun, fashionably interrupting the event?  I don’t think so!

Being perpetually late, in my opinion, points to disorganization and inconsideration for others, and not caring about how you have disrupted another person’s schedule. Preparing for a meeting in advance, which includes mapping out the route, gathering the required materials, picking out the outfit that will be worn to the meeting, etc, will help a person to be punctual. When an appointment is made and confirmed, it is disrespectful and unprofessional to just put the meeting off without regard for the other person who may have arranged their schedule to fit the meeting.

Unless independently wealthy or perhaps retired, a person is stuck with accepting the fact that being on time IS the norm, so reserving the unhurried lifestyle for a vacation or for times when lateness isn’t a big deal, would be more appropriate.

Will it Ever End?