Food Shopping is Not Fun! 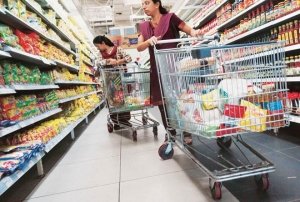 Did you ever notice that Phoenix has a lot of crazy drivers on our streets?  Of course, you have!  I’ve written about it several times over the years, and many of you have commented on my articles and even added your own experiences.

No, I don’t want to write about these people who obviously got their licenses from Walmart.  Ha-ha, funny I should say Walmart, but I have noticed that people push their carts in the supermarkets just like they drive.

Just recently I was shopping at one of my least favorite times of the day.  Lo and behold, my cart got hit by another cart.  It was a hit and run.  These crazy people didn’t even stop to ask if I was ok.  Luckily, there was no blood but I was pinned up against the display case in the frozen food isle. Shame on them!

These people have no clue about the rules of carts.  Stay on your side of the isle, don’t try to squeeze between 2 carts when there is limited space, and for God’s sake, don’t leave your cart in the middle of the isle and wander off blocking any way of me getting through the area. It’s not a parking lot!

There should be traffic lights at the end of each isle, and clerks should be able to ticket offenders, especially when they run into other shoppers. I have to mention those people who use those carts they sit in and drive.  Yes, I do feel for them becasue they can’t walk or stand, so doing their own shopping, I’m sure, is a hassle, but I don’t think they really know who to control those carts.  That, my friends, is an catastrophe waiting to happen.

When shoppers are finished unloading their purchase into their car, they should take 45 seconds to bring the cart in the areas specifically designated for carts, and not leave them where they can roll into a parked car.  These are the same people who would go ballistic if a cart hit their car.

Food shopping is a necessity so it has to be made safer.  Or…I be forced to order by phone and have it delivered.

Sure, I Can Do That!

R is for Responsibility