Do you Lyft or Uber it? 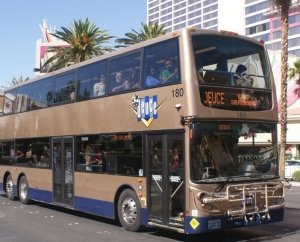 A friend and I went to Vegas for the day, so we thought it would be fun to buy a 24-hr bus pass from the automated machine at the airport bus stop.  We were approached by a guy with a handful of bus passes offering a deal to every person who walked up to the ticket vending machine. He looked sleezy to us and everyone else, so we opted to purchase the automated passes, went through the gyrations and waited for the tickets to pop out of the slot, but they didn’t.

Luckily there was a phone number on the face of the machine.  Ah, a real person answered the phone and seemed very interested in solving our problem.  He said the vending machine has been broken for 2 weeks so he was going to have the bus driver give us our passes since they were already paid for.  The company knew the machine has been broken and didn’t bother to put an “out-of-order” sign on it?  Good customer service, not!

This guy sounded like he had a plan but he came back after 15 minutes and said he couldn’t get the driver to give us passes, so he would send a refund check to cover the charges on our credit cards.  We are not holding our breath for this one.

We had fun and it was time to get to the airport for our departure flight.  I kept getting emails saying the flight was delayed.  The original departure time was 8 pm but ended up as a 9:25 pm departure.  Thinking we had had enough with the buses, taking a Lyft sounded like a better plan.  We ordered the ride, agreed to ride sharing since we had plenty of time and watched on our phone as the driver was on her way.  We had no communication from the driver but instead saw a note on the screen saying, “picking up Viviane.”  Ok, that would work but after 20 minutes of watching the car travel in circles and not seeing a note that said “picked up Viviane,” we made the decision to cancel and get another Lyft.  That driver showed up in 5 minutes, and we were on our way . . . so we thought!

We got into his car #2 and told him we had to get to the airport fast or we would miss our flight.  Bad News!  He didn’t speak English!  We deciphered that he was headed to T-Mobile Arena to pick up another fare.  Great!  All roads were at a standstill because the Vegas Golden Knights were playing the Washington Capitals for the Stanley Cup Playoffs.

The driver couldn’t find his passenger and gave his phone to the parking lot attendant for a translation of the passenger’s description of where he was waiting.

At this point it was a given that our plane was leaving without us, and our driver had no clue what was going on and why we were upset, to say the least.

Yes, we were able to get the next flight to Phoenix but, that’s not the point.

Uber is a $60 billion company and Lyft is worth $5.5 billion. That’s billion with a b, people.  There have been many drivers from both companies accused of sexually assaulting or abusing passengers. Recently a passenger was murdered by his Uber driver in Denver, but drivers have also been victims of murder, robbery and assault, as well.

Bottom line is that ride sharing companies must do a better job of extensive background checks on their potential drivers, including having the drivers speak the common language of the land in case of any emergencies.

Although the idea of ride sharing seems to be a good one, both the driver and the passenger are being put at risk.

Not My Idea of Fun