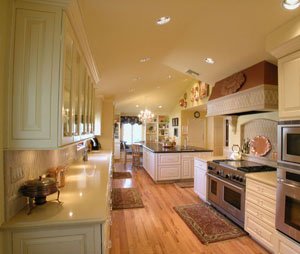 As designers we are thrilled and excited when a project is completed and professional pictures are taken. Most of us then publish the project on our website, Houzz or a blog, but the primary hope would be to have the pictures published in a magazine.

Several years ago I uploaded many of my projects on Flickr, a popular photo storage/sharing site that has 51 million registered users. Flickr offered a creative commons license that can be applied to the pictures, which I took advantage of and specified that if my pictures were used, the user would have to link the picture to my website. Sounds nice but this is a false sense of security, which I found out a little too late.

Recently I was surfing Google images and saw one of my projects on the home page of a remodeling company in Ohio. I called and asked to speak to someone about the French Country Kitchen pictured on their home page. The person at the other end of the phone asked if I was interested in having my kitchen remodeled to look like that picture. I explained that I own the picture and they were using it without permission. Her response was, “How do I know you are telling the truth? We have been using that picture for years.” She said she was going on vacation with hubby (they own the company) and would review my request when they returned. I then called 2 weeks later to follow up since the picture was still on their site. Mrs. Owner was not the sharpest knife in the drawer and told me she had nothing to do with their website and didn’t even know how to send emails. Who, in today’s world, admits that?? She repeated that she asked her husband to follow up on my request to remove the picture or link it to my website, but he was very busy and besides, didn’t know how to get into their website. (This is a perfect example of a business owner not knowing what is going on.) The picture was finally replaced with another project, which may or may not have been done by them, but I don’t care at this point.

Out of curiosity I checked Google images for some of my other pictures and found that over 500 sites are using one of the French country pictures without linking to my site. The project had 25 pictures total, and I’m sure most of the pictures floating around the internet.

As a caveat, I would guess that all the pictures on Houzz or any other site are vulnerable to copyright infringement. Watermarking your pictures might help to project your property, but it’s too late for the pictures that have been on the internet for several years.

Following up on copyright infringement charge would take a lot of money and time. The end result might lead to a $10,000 fine, but that’s a gamble I don’t need to take.
I can just suck it up and forget it, or feel thrilled that people are using my pictures. No, that’s not how I feel, and for those of you who know me, you know what is going on in my mind.

Nancy is also a Certified Kitchen Designer specializing in whole house remodels.  You can visit her website at NancyHugo.com or email her at Nancy@nancyhugo.com

Did this ever happen to You?