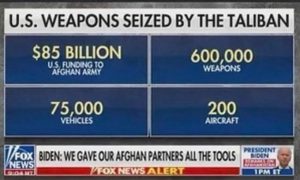 Is Joe Biden a hero for pulling out of Afghanistan on August 31, 2021, or is he responsible for causing this debacle leaving so many Americans and Afghans behind to be hunted down and tortured by the Taliban?  Oh, and don’t forget those 13 troops who died at the airport in Kabul and the drone that killed 7 Afghan children.

Seems that finger pointing, not taking responsibility and creative lying has become commonplace in this administration. Meanwhile, according to some “journalists,”  private groups are trying to get US citizens and Afghan citizens out of the country with resistance from our government, but the US government says they are rescuing Americans left behind.  Who do we believe?

I find it sickening that the media is actually running this country by writing stories, fact or fiction, to sway people’s thinking. They control what many Americans believe to be true. I could not find anything that was written or spoken within the last few days on the status of the Americans in Afghanistan.  It’s the old saying, if you don’t talk about it, it didn’t happen.

Biden has not mentioned one word about Afghanistan nor will he answer any questions from reporters about the fall of Kabul, although he constantly badgers the American public about masks and climate change. He is also ignoring the crisis at the southern border which has had 1.1 million illegals move into our country with many, many more expected.

These people are being given food, clothing, shelter, medical, and education plus travel expenses and a cell phone.  We have over 40,000 homeless veterans!  Let that sink in.

This is strictly my opinion.  If you have something to say, I welcome comments.

Get the Truth from Those who Know.

It’s only a Game!

Shame on the prince!