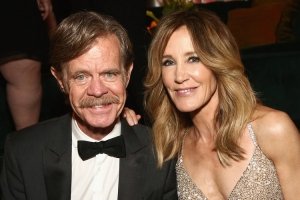 Unless you live under a seashell on the beaches of the Samoan Islands, you have heard every day for the past 7 months about the College Admissions scandal where the rich and famous paid to get their kids into well-known colleges by cheating on tests and lying on applications.  IMHO, these are the kids who have to go through life knowing that their parents didn’t think they were smart enough to get a good education on their own merits.  At least 51 wealthy people are alleged to have been part of the conspiracy, a number of whom have pled guilty or agreed to plead guilty.

The first person to be convicted and given a prison term was actress Felicity Huffman.  She wanted to make it clear to the judge sentencing her that what she did in the college case didn’t hurt anyone, and therefore there’s no precedent to put her in prison for even a day.  Yeah, right! Her husband, William H. Macy, who looks like a poor excuse for a puppet-face, wrote a tear stained letter to the judge pleading that this amazing woman he married works so hard to raise their wonderful children, blah, blah, blah, and it will take years to rebuilt their relationship.  These two idiots must be going for an academy award, but no one is raising a finger to nominate them.

OMG!  Her sentence is a mere 13 days in a cushy prison 40 miles from her house. Actually, her prison term doesn’t even give her enough time to unpack her Louie Vuitton.  And, her room looks nicer than some upper deck compartments on a cruise ship.

As for the hard labor and cruel punishments she must endure, the poor dear will only be allowed to sunbath if she fixes her bed by 6:30 am on weekdays and 10am on weekend.  No need for make-up, fancy hair do’s or dressing to impress.  She doesn’t have to cook, wash dishes, do the laundry, food shopping or house cleaning.

If you ask me, it sounds like a vacation some of us could use but without the black mark of a convicted criminal on our record.

You are what you Eat