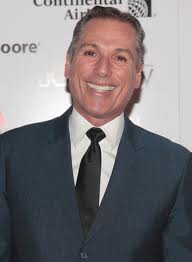 Vicente Wolf, based in a New York City loft, has been designing for over 35 years in his unique style.  Not hesitant about sharing the fact that he has no formal design education, didn’t finish high school, is dyslexic and has a short attention span, he is very open about his ways of working with his clients, what he charges and what his design methods are for his projects.  He is a world-wide traveler and  shopper, and an accomplished photographer.  He addition, he is an avid art collector and has written 3 books.

His sense of humor and sarcasm seems to be ingrained although it might come from living and surviving in New York City from a young age.  He certainly was interesting and very entertaining. 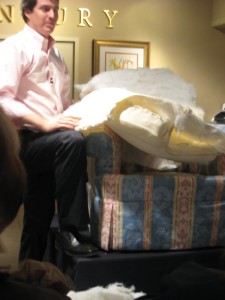 Photo taken at another workshop

Alex Shuford, III, was introduced as “the new President” of Century Furniture, a 64 yr old, family-owned North Carolina company that was started by Alex’s grandfather.  Alex gave a hands-on workshop  deconstructing a chair showing all the layers of what goes into making a Century product.  His props were an upholstered chair with seat cushion, well-padded arms and skirt and a box cutter.  He seemed very well-experienced in tearing down chairs, but I have to assume he travels through the country giving this same workshop.

I had no idea how much down goes into one chair but Alex tore off every piece from his chair and piled it up on stage.  As in the speaker before him, transparency was key in this presentation as Alex showed  how the Century product is made.  There is a YouTube video showing factory production of furniture, as well as frequently offered factory tours.


In addition to these two workshops, all the showrooms were open and hospitable to all who walked through the design center.  Lunch was provided by David E. Adler, Inc.

Another K-name in the World

What’s under the sink?

Stick a Fork in It!