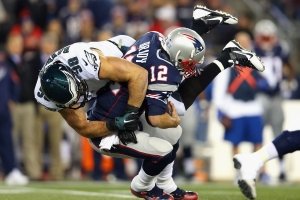 Today is Super Bowl Sunday when everyone except me is glued to their big screen TV, drinking beer and eating every kind of junk food known to man.  I’ve shared my feelings about football before, but what the heck, I’ll do it again.

I don’t get it!  Big boys running after a little weird shaped ball and getting paid big bucks, lots of publicity and concussions!  Yep, that’s right.  It has been proven that playing football is not a safe sport. The link between football and traumatic brain injury continues to strengthen. Now, one of the largest studies on the subject to date finds that 110 out of 111 deceased NFL players had chronic traumatic encephalopathy (CTE), a degenerative brain disorder associated with repetitive head trauma.

I have listened to some of the pro football players speak during an interview, and unfortunately, in my opinion, it sounds like they have already experienced head traumas and brain injuries.

The bottom line is that parents who encourage their children to play football hoping that their talented tikes might be granted a college scholarship which, in turn, could lead to a professional football contract and big bucks are not thinking clearly.  Have they ever thought of what the body actually endures during practice and games?  Every year there are players whose deaths have been related to this sport.

I know a parent who coached Pop Warner football and insisted his son play the game.  Within the first week of practice his son broke his hand and dislocated his shoulder.  I suggested that this child take up golf or tennis but the father said, “Football will make him a man.”  Yeah, a man in a lot of pain!

In case you are wondering, my own kids did not play football, but got academic and music scholarships.  Not one broken bone or trip to the emergency room yet!

So you miss San Diego?

What’s in that Bag?