It’s Kind of a Big Deal 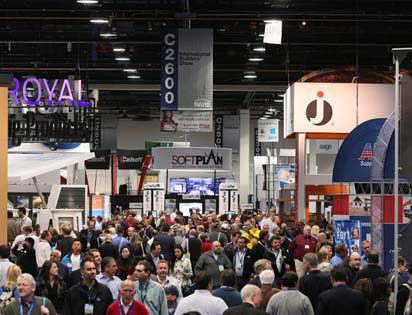 Eat all the french fries you want. Oooooohhh really? Yes really. It will be like you never even had them. Miles and miles AND MILES. That’s what you cover, on foot, at Design and Construction Week in Las Vegas – so carb loading is recommended

I just returned from my first such marathon and I have to say WOW. I’ve gone to Market for years but never in the same week as KBIS, IBS, IWCE and TISS. It is an enormous and impressive undertaking to orchestrate five major industry shows simultaneously, yet they do, and they make it seem like it’s all in a day’s work. I’m always awestruck by the lengths some exhibitors will go. Huge, wildly elaborate exhibits are created, seemingly overnight, to display every and all things that represent their company. Designed, most assuredly, to draw you in, dazzle you with their product or service and leave a lasting impression that will, at some point in the future, turn in to a sale. At least they hope. Of course, there is a range of budgets from vendor to vendor, some are very humble and others as I’ve mentioned, pull out all the stops. Hundreds of thousands of dollars are spent to entice the buyer and capture market share. It’s big business. Really big. What I found astonishing, as I trudged up and down aisle after aisle in show after show, was an alarming and somehow banal common denominator across the board – cell phones. 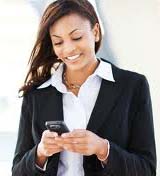 Cell phones at at trade show Leann? Duh – you might say. You’d be right! It should come as no surprise that everyone and their cousin is using their cell phone at a trade show. The shocking bit was how. Almost every both or show space I passed was staffed with people, heads down, texting. If they weren’t texting they were deep in conversation with one another. I went virtually unnoticed by countless representatives as I ambled by, gazing at displays, sometimes even stopping and handling the merchandise. Nothing. Nada. Zip. I could have lit my self on fire and no one would have noticed. I had to approach one booth 3 times and start manhandling the product before someone acknowledged I was there. Madness! Now, lest you think I’m exaggerating ( why on earth would you think that?) or, that I may have been wearing my invisibility cloak ( nope, forgot to pack it), I chatted up my pals about their experiences and discovered they were ignored just as much as I was!! In fact some accounts are worse, like walking up to an exhibit to find the only person there is facing away from attendees with her behind in the air or looking over to see the guy peddling XYZ has his finger in his nose. I guess if they are going for a lasting impression they’ve at least succeeded at that.

It’s no small thing to exhibit at a trade show, most especially a trade show with upwards of 150,000 attendees. It’s kind of a big deal and very, very expensive. ROI can take time, chiefly when the most costly aspect of your exhibit is your bored and disinterested company representative. So, c’mon now Smiles Everyone, Smiles!

Leann Fernald is a designer, IFDA New Member VP, owner of Festoon Interiors LLC, new product entrepreneur and practicing plate spinner. Her back ground is varied and covers hospitality and vacation tourism, aquaculture, new business development, national sales and marketing.  She is currently working on a new enterprise offering a product to the design Industry and certainly won’t stop there.  You can reach Leann by email at festoondesigns@gmail.com on her mobile 480-326-8450

Did you Hear Me?