It’s only a Dent! 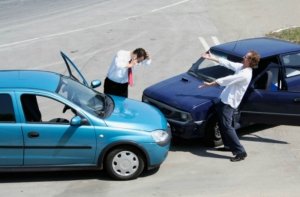 Do fender benders, simple little mishaps, require the owners of the vehicles involved to stop dead in their tracks where the “accident” happens? Absolutely not!  People, moving the vehicles to the side of the road is not considered “Leaving the scene of the accident.”

Living in Phoenix and surrounding areas, we all know that accidents are part of the traffic experience, especially during rush hours, which by the way, seems to have extended from 7am to 6pm (I’m being conservative about those hours).

The population is growing, hence there are more people and more cars traveling on our roads constantly.

The other day, during rush hour, of course, I was stopped at the light of a majo, back 3 cars.  Traffic was at a standstill.  There were 2 cars, nose to nose, in the middle of this major intersection, and they were not going to move.  I’m sure there was a dent somewhere, so the drivers were arguing about whose fault it was while they were waiting for the cops to arrive.  Naturally, neither one of these idiots had the common sense to move their cars to a parking lot (there was one on each corner) so traffic could move freely.  This was only a fender bender, people!

I’m not minimizing traffic accidents, by no means.  But, accessing the situation and, if the car is drivable, realizing you are not the only one on the road would be a great service to those who are stuck in the mess you created.

By the way, since I’m ranting about drivers, I want to update the soapbox I wrote on January 20, 2019, regarding Prince Phillip being involved in a rollover accident.  There was a lot of criticism about him continuing to drive, so he finally gave up his license, and hopefully, his car.  Whether the Queen or his kids insisted, the fact is that he not longer will be driving on public roads.

There comes a time when the family must step in to take the license, the car and the keys away from an elderly person who shows lack of awareness, reaction time and good eyesight.  Give them an uber gift card and save their life and the lives of others.

And Why Would I Want This?