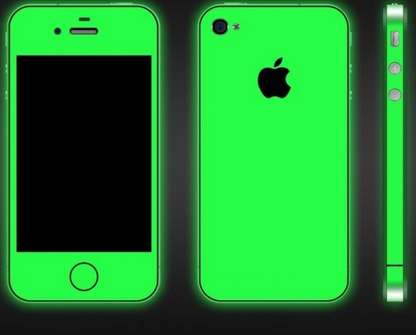 iGlow, a company known for its unusually bright products, has just released a cool new glow-in-the-dark case for the iPhone 5.

While acting more like a wrap than a case, in that it adheres to the iPhone’s surface rather than snapping into place around the phone, this glow in the dark design adds a bit of sci-fi flair to an already hi-tech gadget.  While dressed in iGlow’s luminescent product, this iPhone has the ability to glow bright green in the dead of night.

iGlow’s new case looks cool, but it also serves some pretty important functions, as well.  Its green glow makes the iPhone easy to find in the dark, while its 360 degree coverage of the phone itself protects the iPhone’s screen, earphone jack, and everything in between.

With this startlingly bright case from iGlow, iPhone users will never have to worry about losing their phone in the dark again, while simultaneously impressing their friends with their fantastical glow in the dark phone cover. Glow, a company known for its unusually bright products, has just released a cool new glow in the dark case for the iPhone 5.

Alexa Can Talk to your Mirror – Watch Now!

The World is a Crazy Place