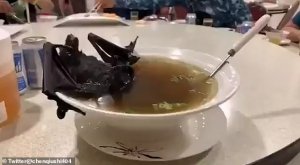 Several months ago, I wrote about (What Are You Really Eating?) some of the fast foods on the McDonald’s Menu being gross. Some of their items are made up of 70 ingredients, none of which I would consider eating, but after reading about the Coronavirus, I have to apologize to Ronald McDonald.  As far as I know, their food never caused an epidemic.

Scientists believe this new deadly virus comes from bats and snakes. Unbelieve and disgusting as it sounds, people in China are actually eating these “exotic” animals, in addition to koalas, cats, dogs & monkeys to name a few.

I never really considered bats and snakes exotic, but then again, I never in my wildest imagination would eat these animals.  Heck, I don’t even eat beef.

The new strain of coronavirus, which emerged in the central Chinese city of Wuhan last month, has killed at least 25 people, caused illness in more than 800 and caused the city of 11million to be in lockdown. FYI, the virus from Wahun is labeled “2019-nCoV” for “2019 novel corona virus” since it’s unusual (novel).

This city was quarantined yesterday, with officials cancelling  all flights and trains from entering or leaving the city. Several other cities in China are going into lockdown as officials battle to stop the spread of this deadly virus.

Unfortunately, the timing is bad as the Lunar New Year celebrations have been cancelled in China. Like many major holidays, Lunar New Year is best spent with family and friends. The tradition is so crucial that LNY travel is annually heralded as the ‘world’s largest human migration, but this year families will not be traveling to be together and celebrate. This is very sad for the Chinese people, their country and the world.

Even if you Think you Know How, Read this Anyway!

What Have You Been Doing?

Do You Do This?