Be Cool with Steam

It was cool technology more than 3000 years ago when the Chinese developed the cooking method of using steam.  It didn’t change much until the 17th century with the invention of the safety valve.  In the 1950’s the French acclaimed the famous pressure cooker that became the symbol of kitchen modernization.  The 1980’s brought the first electric steam cookers.  Today’s steam ovens are the hottest and coolest of products with many benefits and features that include healthier eating.

Steaming lets the foods cook in their own juices and minimizes the loss of nutrients and vitamins.  Flavonoids are an organic antioxidant compound that provides the pigments that give plants th eir color.  Studies have mentioned that the level of flavonoids lost after steaming fresh broccoli was 11% compared to 47% when pressure cooked and 97% lost when microwaved. When boiling vegetables, the loss of vitamin C, vitamin B1 and mineral salts that dissolve in water are lost when the water is dumped.  The texture of vegetables and fruits is retained better in the steam oven.

If you were to use one of the new steam convection oven products now available on the market for nothing but your vegetable cooking, it would be a big heath benefit. Fish and seafood are particularly well-suited for steam cooking, and are easier to prepare than traditional methods.  Steam cooking also negates the need for cooking oil, fat or butter resulting in lighter and healthier meals. 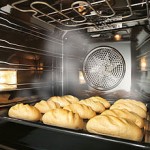 European home cooks embraced the technology of steam ovens many decades ago, so this product is a standard fixture in many European homes.  Miele has offered their steam oven in this country for more than a decade, and deserve to be considered a major factor in the growth of this category.  The functions available go beyond the basics of vegetables and fruits, rice and grains, fish, eggs, legumes and meats.  These ovens can be used for defrosting, reheating, canning, blanching and full meal preparation.  You can even disinfect baby bottles– think autoclave for disinfecting medical equipment.  There really are no drawbacks to this product as it is intended to be used.

The popularity of steam ovens has brought more choice to the market place.  Ideally, a built-in product is the best choice, but counter top models are available, as well.  From a design standpoint, the built in product is gaining in popularity, as it can be placed above a matching traditional single wall oven and used as a second oven.  This is beneficial if there is a space or budget limitation as you increase the versatility of the kitchen.  You will see choices offered by Sharp, Viking, Thermador and others.

Wolf and Thermador have introduced new convection steam ovens that have the added feature of thermal convection heat.  The convection heat adds the ability to prepare meat dishes that will brown and have the appearance you will not get with just steam cooking.  The Wolf convection steam oven includes a temperature probe further enhancing the versatility of the product.  In addition to some of the features and functions already mentioned, these products include all the pans and trays needed to be used most effectively – no need for additional cookware.  You can bake breads, buns, cakes and pastries from fresh, par-baked or frozen products  using the auto steam-bake function.  A nice, shiny crust is formed during auto steam bake.  Yeast and puff pastries do not need to be brushed with egg yolk, oil or cream.  Slow roast is another mode convenience using the temperature probe and is similar to the slow cooker you are likely familiar with.  The keep-warm function may be sufficient for many customers to use in place of a warming drawer saving space.  There are many more additional features and benefits to consider.

Be cool with steam and recommend the steam oven category to you clients. Be cool and take advantage of any of the manufactures’ showroom live events and learn more first hand.

Andy Welemin, Account Manager with Westar Kitchen & Bath, has been involved in home products since 1977 and, specifically, in the appliance industry since 1983.

Andy is a member of NKBA and NARI and a past board member of the National Kitchen & Bath Association, Minnesota andArizona.