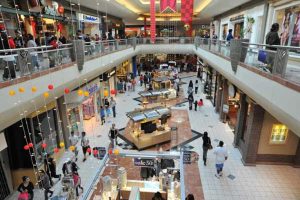 It is with a heavy heart that I share the news of Metrocenter Mall closing June 30, 2020, after 47 years of it being an important part of Phoenix history, and 40 years of being part of our family history.

When we moved to Phoenix in 1978, we stayed at The Rodeway Inn at Metrocenter for one week while we hunted for a house.  Every night we would go mall shopping since we really had nothing else to do.

I decided to apply for a retail position at Joske’s, one of the anchor stores at Metrocenter, since I had been working in retail at a major department store in N.J.  To my amazement, I saw the General Manager of Stern’s standing in the middle of  Joske’s.  He had been promoted to Regional Manager of Allied Stores, who owned Stern’s and Joske’s, so I was hired as part of the management team.

Tami learned to ice skate at Metrocenter and Dan worked at the McDonald’s after school. Needless to say, we knew every square inch of the mall, so you can understand why it’s been sad to say good-bye.

If you are not familiar with Metrocenter, here are a few interesting facts:

With over 1.4 million square feet of space on 312 acres, it was both the largest mall and the first two-story mall in Arizona, and was considered one of the largest shopping centers in the US. A $21 million dollar loan was granted to build the mall – the largest commercial loan in the state’s history (up until that time).

In the 1970s, a typical mall layout had 1 to 3 large “anchor stores” surrounded by smaller stores and restaurants. Metrocenter was unprecedented for having 5 anchor stores! The original five were Sears, Rhodes Brothers, Diamond’s, Goldwater’s, and The Broadway.

One of the features that made Metrocenter different from other malls was its unique appearance. Local architect Robert Fairburn drew inspiration from Le Corbusier’s Palace of Assembly in Chandigarh, India.

Metrocenter Mall made its big-screen debut in the 1989 film Bill and Ted’s Excellent Adventure starring Keanu Reeves and Alex Winter. Key scenes of the film were shot on location at the mall, as well as other locations in Phoenix.

The interior theme of Metrocenter had a futuristic look with curved seating, unusual ceilings archways and columns,

Metrocenter’s days have been numbers since 2000, and now the owners are blaming the pandemic.  In reality this mall has obviously been on its deathbed for too long, so it’s time to say farewell and put it out of its misery.  It was a nice ride while it lasted.

It’s a Little Too Soon