It happened again!  Someone must have changed the driving rules and didn’t tell me about emergency vehicles not having the right of way.  I heard the sirens blasting as I hoped everyone else did.  Finally I spotted the fire engine coming from my left as I was stopped at an intersection.  Several other drivers were stopped and, yes, we did have a green light.  There were a few drivers who actually drove through the intersection while the fire engine stopped for THEM.  This was incredible!  They must be the same people that cut in line.  They have that “me first” attitude.  Firemen must be very aware of drivers not paying attention while driving or there would be many more horrendous accidents then there are.

On another note, twice last week I was in a parking lot watching drivers with very large pick-up trucks pull out of their space extremely slowly.  Both vehicles were driven by women (could have been men, but I have to be honest here) and both were talking on their phone.  I could tell that they were not sure of the size of their vehicle.  Maneuvering an F150 in a very tight parking lot would be difficult for anyone with 2 hands on the wheel, but those one-handed drivers look pathetic, not to mention dangerous. 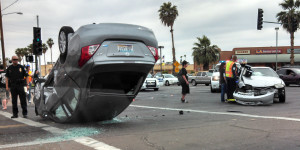 Here’s my final experience of the week.  No, I was not involved in this accident, thank you, God!  I was stopped at the light by a cop so the cars perpendicular to my street could go through the intersection.  What makes a car flip over like this?  Could it be the driver?  Maybe he was not looking around, maybe texting, maybe not his fault.  Hopefully, all the people involved weren’t hurt too seriously.

Driving is a crap-shot.  We all hope we will get where we are headed without being involved in an accident. There is something to be said about the good old days of the horse and buggy.

The Wings of Time