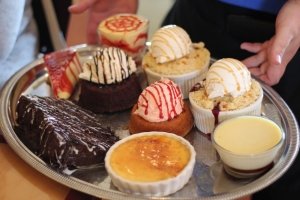 Americans love food!  Losing weight and eating healthier is always on the list of new years resolutions.  Why?  Because Americans are getting bigger and bigger.

According to The Centers for Disease Control and Prevention, the average American man now stands at 5-feet-9 1/4 inches tall and weighs 196 pounds — up 15 pounds from 20 years ago. For women, the change has been even more striking: The average female today stands 5-feet-3 3/4 inches and weighs 169 pounds. In 1994, her scale read 152 pounds

Alongside the rise in obesity, there has been an in increase in diabetes, heart disease, and metabolic syndrome.

Magazines are always blasting headlines about a new diet touting that you can lose 20 pounds in a month.  We know that’s impossible and not very healthy.  If by chance it did work for the chosen few, the weight usually creeps back.

Those same magazines advertising fad diets have pages and pages of fattening recipes and pictures of junk foods. The ultimate in oxymorons.

As a society, we put too much emphasis on food. It’s a social activity associated with happy hours, weddings, meetings, etc.  The chatter is not about the event, it’s about the quality and quantity of the food and booze.

There’s a science to “making” people eat junk.  Sit at any bar and you will see bowls of salted nuts and pretzels compliments of the establishment.  The salt increases thirst, hence more drinks are sold.

Restaurants give bonuses to the wait staff when they sell desserts.  Bringing the dessert tray to your table to view is not just them being nice.  It’s to enforce the idea of dessert being a necessity following the dinner.

Sugary, oily junk foods are engineered to be consumed often and in big portions. But we’re not just influenced by their irresistible taste. The food industry is also terrific at marketing its products to us — and turning us into loyal, overweight consumers.

Let’s meet up for coffee only!