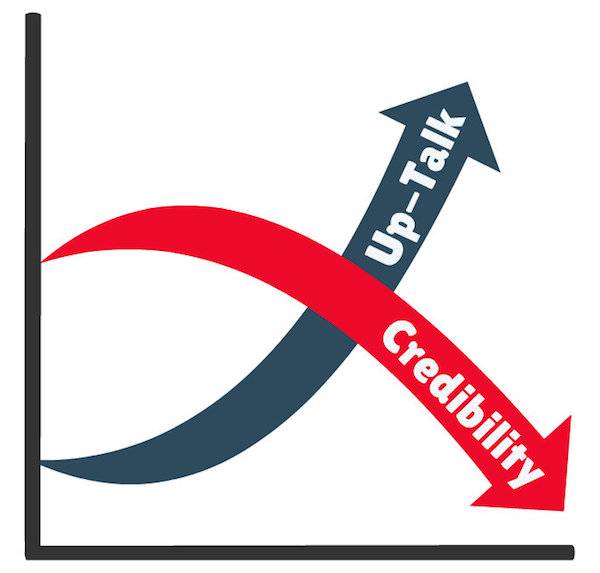 What’s up with people who raise the tone of their voice at the end of each sentence as if they are asking a question, when in fact, they are not?  Sitting through a one hour seminar the other day was actually painful, because every sentence that came out of the speaker’s mouth ended in a question.  I stopped listening to what she was saying, because how she was saying it was very annoying and distracting.

Would you believe there is an actual name for this affliction?  Wikipedia has given a full page to what is called “High Rising Terminal.”  Sounds more like a multi-level bus depot, but not to digress, here is the description: The high rising terminal (HRT), also known as moronic interrogative, uptalk, upspeak, rising inflection, unnecessary inflection, or high rising intonation (HRI), is a feature of some accents of English where statements have a rising intonation pattern in the final syllable or syllables of the utterance.

It started popping up several years ago, but unfortunately, it hasn’t gone away.  Most of the time when people talk like this, they also talk very fast.  I never know if I should answer the question, but then, is it a question or not?   I have noticed that many politicians, Hollywood weirdos and public speakers, no matter the age, all have acquired this affliction. Could it be that it is catching? I can take it for a sentence or two but not much more than that.  It is as irritating as nails on a chalkboard, if you know what I mean.

I guess I’m more aware of this annoying habit because I have had a radio show in the past, and have been doing podcasts for several years.  Getting your point across on these broadcasts without having distractions is key.  If you have fallen into the habit of upspeaking, using words “you know” or “like” or “um” sprinkled throughout your comments when talking to “anyone,” record yourself and then play it back.  If you are happy with the recording, so be it!  If you are not, it just takes practice, practice and more practice, but putting in the effort is well worth it.

This has been a crazy time for all of us.  My last podcast was late March chatting about being positive - just me and my microphone.