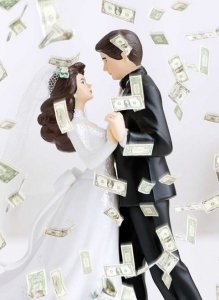 I recently read an appalling article about a bridezilla (by the way, after doing research there is a whole society of bridezillas) who wanted to have her dream wedding.

Oh, what to do, what to do?  You do what every spoiled, entitled crazy person does.  You post on Facebook that you expect your friends (I’m sure ex-friends now) to “give you” $1,500 for the privilege of attending their wedding.

In addition, she expected her maid of honor to pledge $5,000 and $3,000 from the groom’s parents.  The caveat was that if you did not intend to pledge or give this money which was specified as cash, you were not invited to the event.

The bottom line is that her friends and relatives did the right thing.  They refused her the money and reneged on the pledges. After the groom suggested a Las Vegas wedding, the bride went ballistic so the groom left — never to return.  Sounds like a happy ending to me, right?

Along with the facebook announcement that the “happy” couple broke up due to “recent and irreparable problems,” the ex-bride posted the most deplorable comments using every despicable 4-letter word in her limited vocabulary.  She also announced that she was shutting down her facebook account and backpacking in South America to rid her soul of toxic energy brought on by her friends. She did receive some cash, but refused to return the money. Karma will get her.

I was surprised that the brides posts were published by facebook, but then almost nothing surprises me anymore. I would venture to guess that she has NO friends anymore. Lucky them!

I was almost at a loss for words after reading about this situation, but you all know me by now.  I always have something to say.  This bridezilla is an ingrate who expects everyone to give her happiness, in the form cash. We all know it doesn’t work that way.

Unfortunately, these morons have procreated so there will be more like her. So sad!

Jem is Nancy's guest this week.  They both gave their views and opinions on some of the interior design trends of today. See if you agree with them.

HOME DESIGN CHAT WITH NANCY is now on 20+ platforms; easier to find and listen on your phone or desk top. Check it out HERE