I couldn’t let another week go by without sharing my trip to the SubZero Wolf Training Center in Madison, Wisconsin.  Flying into Chicago on Sunday afternoon was very interesting, to say the least.  I have never landed in such strong cross-winds before, but luckily the pilot must have practiced because we are all still here.  The “we” is a list of various designers from the area who were chosen by Whitney Williams and Marisa McClure, 2 cuties with SubZero, to be present at the introduction of many new SubZero Wolf products which will be introduced to the market over the next 2 years. 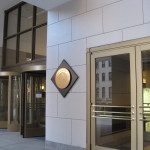 Monday morning was the beginning of “the experience” when we walked to the Chicago Merchandise Mart.  By the way, we had great weather in Chicago as well as Madison.  Snow hit the area after we left.  Thank you, God!  The Mart was built in the art deco style during the Great Depression and completed in 1931.  When in opened, it was the largest building in the world with 4 million square feet of floor space.

In the mid-1940s and 1950s, The Merchandise Mart was the single largest producer of trade shows in the United States.  It helped to lay the foundation for Chicago’s continued leadership in America’s convention and tourism industry.  Since the mid-1940s, showrooms in The Merchandise Mart have displayed almost every kind of product produced and MMPI has attracted every sort of professional buyer to the building. 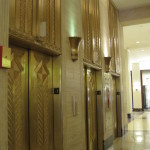 Today The Mart is the world’s largest commercial building, largest wholesale design center and one of Chicago’s premier international business locations. The Chicago icon encompasses 4.2 million gross square feet, spans two city blocks and rises 25 stories.  It is home to 15 major trade and consumer shows as well as hundreds of meetings and special events.  Because The Mart is also home to corporate offices of dozens of leading firms and attracts professional buyers and consumers to its showrooms and events, The Mart is visited by 38,500 people each business day.

The SubZero Wolf Showroom was our first stop at the Mart, of course.  We walked around their fantastically designed vignettes while the corporate chefs were preparing breakfast.  The design ideas were amazing, the glass and metal work was very unusual and, even the cabinet hardware was something I had never seen.  I was snapping pictures at every turn.

The picture at left shows a 48″ side-by-side refrigerator with water and ice in the door which was incorporated into the design making this apparatus the focal point of the design.  This definitely was an eye-catcher.

So, who from Phoenix/Scottsdale was on the trip?  Check it out.  And by the way, check out breakfast.  This was just the beginning of the food marathon we were going to experience. 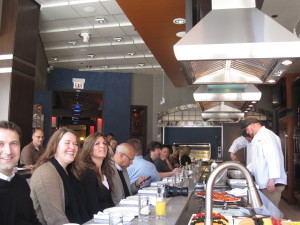 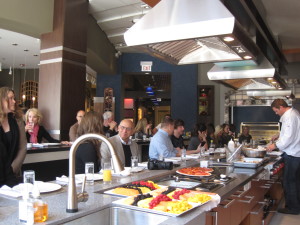 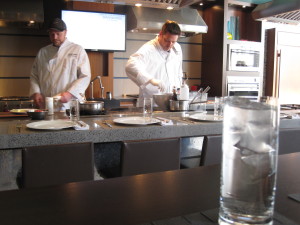